Our day at the Boston Festival of Indie Games

Our day at the Boston Festival of Indie Games

Wow, Sam and I will probably never get our voices back. From our first group of players on we couldn’t step away from the tables for a moment. But really, with all the awesome people that stopped by to play No Regerts, we didn’t want to step away. We got to watch people do horrible and hilarious things to their friends, which is always fun. We also got to stick a bunch of temporary tattoos from the game on a ton of people. We ran out of our unicorn, banana and sushi octopus tattoos. I guess that tells us that people like there weird stuff best. 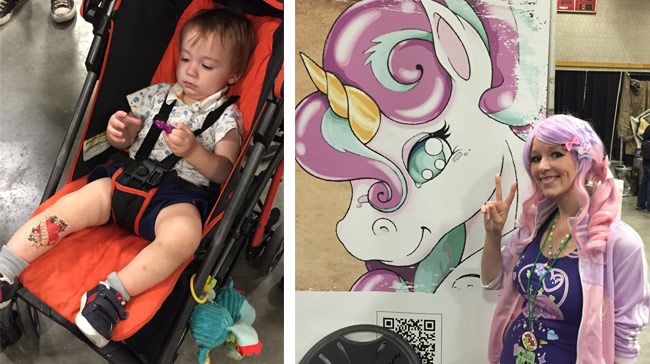 Sam got to talk up No Regerts to a few bloggers that stopped by and did a video interview for the Delve Podcast. Meanwhile, I set a new record for longest time with no bathroom breaks (, that’s probably an exaggeration.) But seriously, we had over 200 people play No Regerts, and let’s just say, we’re pros at explaining the rules. And we were happy to see that most groups had the game play down and were starting to think about strategy by their second turn.

We didn’t really get much time to see any of the other games but we had gotten to play a few before today. It was great to see Clean Up Your Room! get a nomination for a Figgie in the category of best family game. The Audience choice award went to Wicked Apple, which is a great card game. We actually just backed Heroes of History, which is also live on kickstarter now. As for No Regerts, we got a nomination for best game in progress, so that’s cool too.

We can’t thank our helpers Jen and Andy enough for keeping everyone entertained while they waited for a table to open up. Jen got to touch a ton of people as our temporary tattoo artist of the day and depending on how you look at it, that might be thanks enough. As for Andy, she simply has a level of energy that is unheard of in human beings. We took them out for Mexican food later, they earned it.

All in all it was a great day. Now we sleep… just kidding, now we work on getting more backers.